This is more of a travelogue than anything else I've written up before. After work on Friday, I got in the car and drove away. No location in mind, just an idea to go away. I started south and got caught too close to the coast and had to backtrack. Outside of Rotterdam, I admitted I was not sure which road to take, so I broke down and bought a couple of maps of the Netherlands and Belguim. Getting past Rotterdam took a while, and I was on my way to Antwerp. I decided to go to Bruge, which was recommended to me by Mark as a cool medieval town.

Going around Antwerp, I wound up on the wrong road to Bruge. I was on the smaller, back road, rather than the equivalent of the interstate. This wouldn't be a problem, but I was getting short of gas. And there were no gas stations anywhere. I kept going expecting to find one. And there was nothing. I started looking at the map, and turned off the road to go to Zelzate, which looked like a town not too far away. I had no Belgian Francs, and no PIN card, and was starting to question the wisdom of just heading off and driving. I found a bank first rather than a gas station, so I got some francs. I found a gas station in the town and it was closed! But wait, there were people gassing up. The gas station was closed at 8:00 pm. It had an automatic payment method. I ran from bar to restaurant looking to change the 2000 franc note I got from the ATM into something that the automatic changer would take. There was a street fair going on and I got change at the arcade. I went back to the gas station and started feeding notes in. 9:15pm. It rejected almost all my notes. It only accepted 200 francs. Thats about $5 worth and it bought 5 liters. I decided to park the car and try to find somewhere to stay in the town and gas up the next day. 9:45pm 1 hotel was closed for holiday and the other place I was directed to was full. 10:15pm The lady at the hotel told me to go to Gent.

So I scratched the idea of staying put for the night and headed off with my gas tank pointing at the 1/8 full marker.

Gent wasn't too far and I followed the arrows for the center of town. Pretty soon I was driving on cobblestone and noticed that there were no cars around me and a lot of people, I soon discovered that I was driving on tram tracks as well and figured I was in the center of town. I found a Hotel Ibis, checked in, got directions to a parking garage and finally parked my car at 11:15pm.

I grabbed my bag and walked back to the hotel. Run up to my room to throw my bag in, and discover that mine isn't the only bag in the room. There is a backpack, and clothes are hanging up in the closet, and around the bed. Drag myself back downstairs and complain that they gave me a room where the previous occupant hadn't checked out. After the clerk didn't believe me, requiring a trip to the fifth floor for both of us, so I could prove I wasn't insane, I got another room and finally changed out of my work cloths at 11:45pm. Now my stomache started growling and I went looking for something to eat. Every restaurant was closed, every bar's kitchhen had stopped serving, so I succumbed to McDonald's. I fell asleep around 12:30am.

The wakeup call at 10:00am came very quickly. I took off to explore Gent. I soon discovered some English signs and discovered the town was also called Ghent. As in Treaty of Ghent. Famous cathedrals, churchs, very cool and old Ghent.

After going back to the hotel and extending my stay another night, I started to check out the place. The Cathedral of St. Bavo was awesome. Side chapels, magnificent artwork, carving, excellent preservation. That took 2 hours. 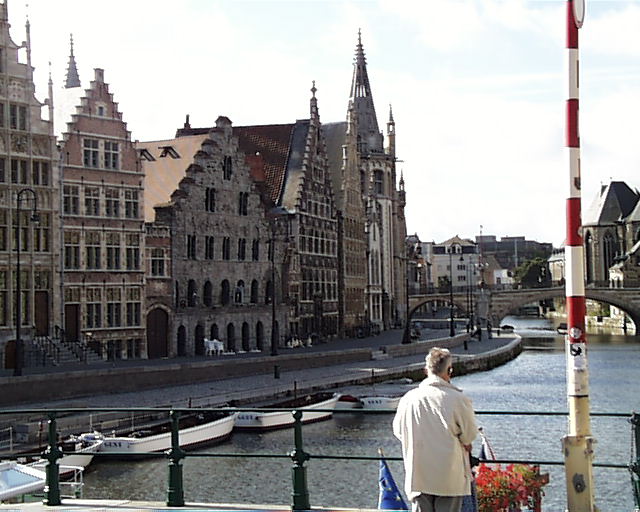 Lunch was an excellent fish grille followed by a boat tour. It was primarily full of Germans and I think the tour guide said about 2 words of English the whole hour. But I caught enough to be impressed. I then headed back to the castle I'd seen on the boat tour. 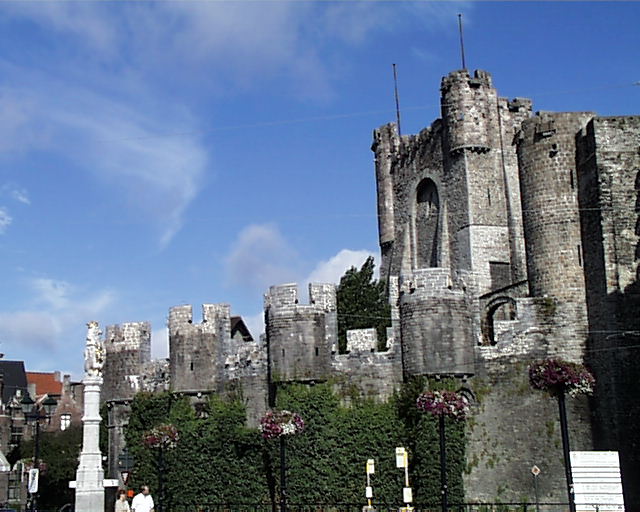 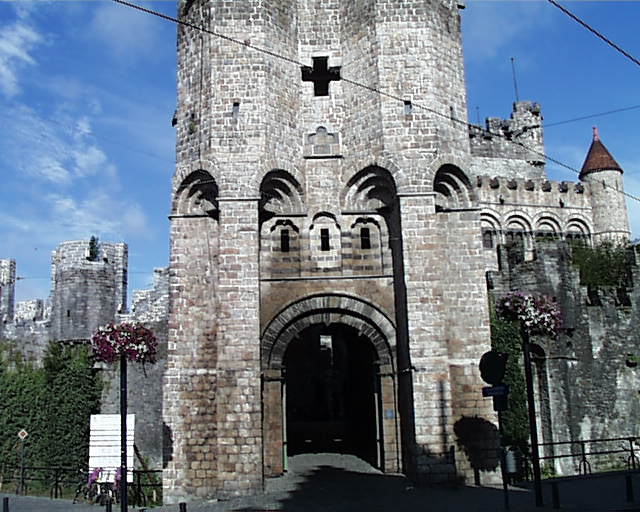 Very impressive, the outer wall particularly is in good shape and well supported and displayed. I always think about how I'd attack one of these and I can only think that it would take a good company and many high explosives to conquer a castle now. 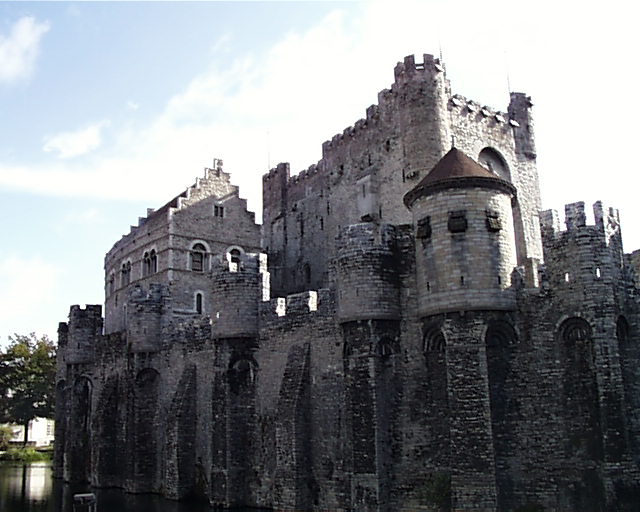 I took a nap during the rainy part of the day and caught up on some sleep.

The seafood restuarant I wanted to eat at was full and no tables opened up for the 45 minutes I waited. So on to the next restaurant. Which provided some very funny entertainment of 14 elderly British people attempting to convince the Belgian restaurant frau of how their check should be split up. Some by couples, some deserts were shared, rounds of drinks were shifted from person to person, it took a full hour for their bill to be settled. And it was all in English so I could enjoy it.

I went back to the hotel, called Bill for a while, grabbed my camera and headed out into the night to get some pictures.

Sunday I finally got to Brugge. It is very nicely preserved and in the style of the 18th century. The buildings are magnificent, and put together as a tourist trap nicely. For lunch I ate a bucket of the local specialty, mussels. The oysters were very tasty.

I followed with a bus tour of the city and listened to a carillon concert of bells before heading home. 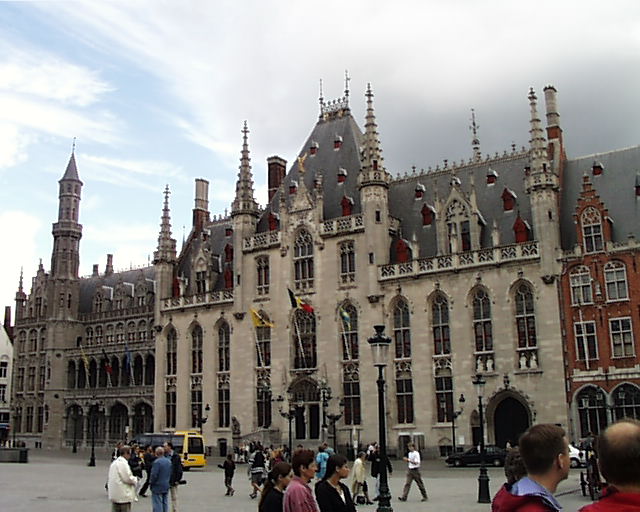 I liked Ghent better than Bruge because Ghent has a truer sense of time passing in its buildings than Brugge. Both are impressive for history buffs and highly recommended