I've been doing some programming in Office and Outlook. My office is trying to automate their leads and accounts tracking. I've been helping program their import and export routines. It has been most difficult and Microsoft's documentation is atrocious. But it has been a lot of fun to help out around the office and show my skills to the other people. Ironicly, I'm using the technolgy, MAPI, that I interviewed at Microsoft to support. It's what Sam and Sean work with everyday. Of course I missed Sam's return to Minnesota again. Everytime he and Rachel come back, I'm in Europe.

That is just one of the things I've missed. The opening of a Best Buy in Mankato, Vikings training camp, several movies that I wanted to see, my high school reunion, being at the lake during the summer.

The heat wave broke and rain poured down on Saturday. I stayed inside and played a computer game most of the day.

I went to the zoo on Sunday. It's called Artis and is a fairly old zoo. Lots of black bars and wire. But the animals are the real stars. A complete reptile house, and pretty good amounts of other animals. In December I visited Animal Kingdom at Walt Disney World with Karin and Jason. It had much better presentation of animals, but was seriously lacking in number of animals. I might have to reevaluate when Animal Kingdom is fully populated and open. However Artis was seriously lacking when it came to funny Dinosaur Restaurants. 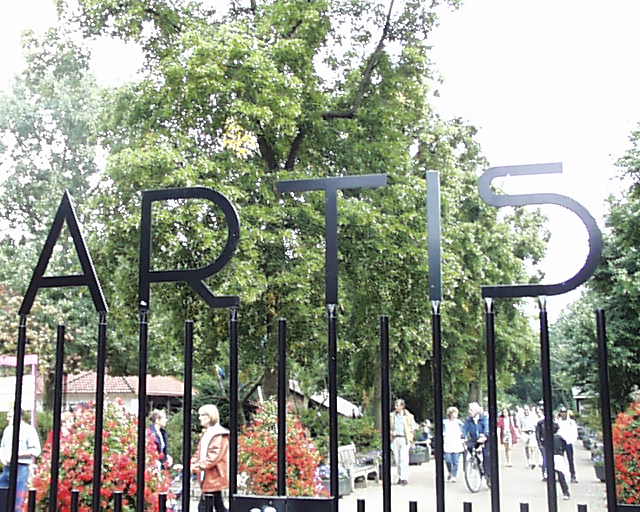 Most of my pictures did not turn out. It was too cloudy and the colors didn't come out well on the digital camera. But the colors of this parrot looked great. 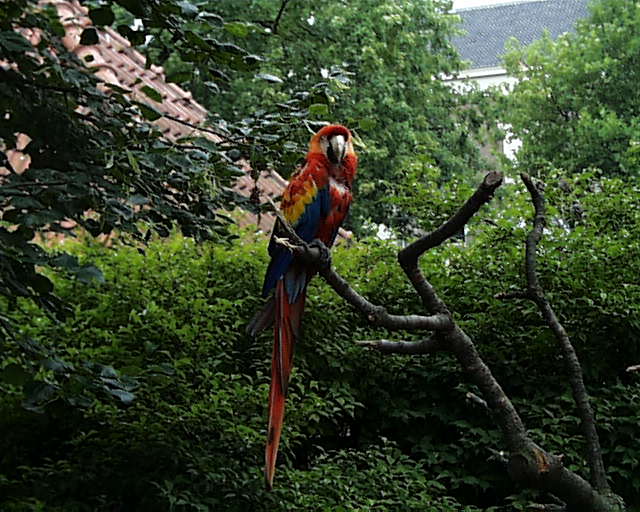 I'm embarrassed to say how many pictures I had to take to get this shot. I've seen shots of dolphins jumping like this, but I've never seen any of seals. 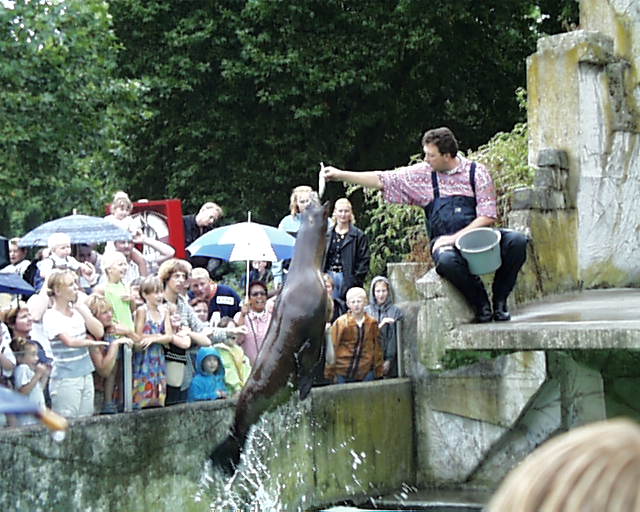 The zoo is a really neat place and very relaxing to hang around. 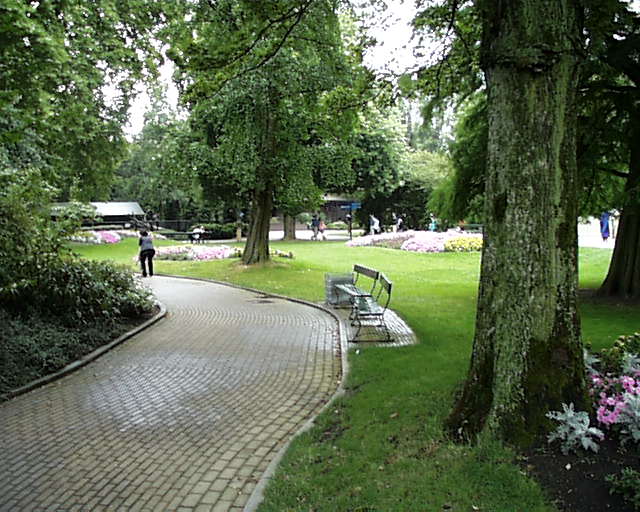 Eclipses are pretty cool. We had one on Wednesday. It happened at 12:30 and the whole office went and watched. The sky was cloudy and we couldn't see much here in Holland. I was very surprised by the effect of not having the sun around. It got very cold, we were chilled being outside. Colors changed. Reds got faded out, and blues got much deeper. The sky turned midnight blue where we could see it. We were caught in a catch-22. The sky was cloudy so the glasses that were distributed were too dark and noone could see through them, but when the clouds broke and parted, we had to peek and see something. But that is dangerous to your eyesight. So we peeked quick. I saw the moon block most of the sun, behind a thin layer of clouds. It looked a lot like a waning moon. We never saw any corona or anything, because the sun wasn't totally blocked. But what we saw looked good. That is good because it is only 90 years until another one happens around here.

After seeing the Columbine killers break 22 gun laws, I don't believe that passing laws 23-25 would have stopped them. And those kids built bombs from common items available at a hardware store (As did Timothy McVeigh, who destroyed that building in Oklahoma City). But the sheer number of killings recently is making me rethink the issue.

The NRA believes in the concept of a slippery slope, where if they do not defeat smaller gun control laws, then harder laws will be added. But I'm moving away from that idea. I think that some changes must be made in our culture.

I don't want the Republican party defeated over this issue, and I think that is a danger. They support the NRA and the 2nd amendment more than is good for themselves. The 2nd Amendment is important and a vital part of self defense. The Kosovars (Both Serbs and Albanians) certainly wish they had weapons to defend themselves from invasions. But unlimited guns might have to be rethought. However I recognize that most gun control laws are at a state and local level, and that is where they should be.

If readers sense that I'm conflicted and have differing thoughts, they are absolutely correct. The kicker to make me totally conflicted is the thought of what would happen if you put up a sign: