As I'm writing this, I'm watching the British Open of Golf. There is a Frenchman who is self destructing and its horrible to watch. What is awesome is that the British announcers on BBC are insulting him and disparaging him. Totally different than American announcers.

Tuesday I woke up early and went down to Eindhoven. Nathalie, Wouter and I toured the DAF Truck Factory. We got to see them assemble engines, build truck chassis, paint them, and then assemble the whole truck. The cabs and transmissions are built elsewhere. But the factory is very cool and I got excited about trucks again.

The rest of the week was spent working on documentation. DAF is on vacation for the next 3 or 4 weeks. So we prepare documents showing what we'll do for that time. I was back in Eindhoven on Friday for some meetings and document changes. They've approved the changes and now we can start programming again.

Wednesday night, I went to a very good seafood restaurant.

On Saturday I went to Utrecht, took a canal boat ride, checked out a couple of huge churchs. I visited a religious museum that was recommended in a guidebook. It turned out to be kinda cool and kinda boring. Amazingly old crosses, bibles and paintings. Our bibles have certainly gotten more boring. I saw some beautiful, jewel encrusted, hand painted bibles. Maybe Gutenburg's invention wasn't so much of a good thing. However you can only see so many examples of "Mary with Child", before you get tired of them. The day got better the longer it went. Utrecht's canals are set down from the city streets, surrounded by great bars and cafes. They also have a shopping mall.

Saturday night, I ate at a Gaucho's Steakhouse in Amsterdam. The steakhouse is on my Amsterdam page for the crazy streetpeople. As it was great weather, I ate on the street again. The druggies and crazies did not disappoint. A druggie started harassing the couple next to me. He insisted that the gentleman was a drug dealer and that he sell drugs to the druggie. The guy didn't look like a drug dealer, but then he could have been in disguise. Anyway, the druggie wasn't fazed by the presence of a couple of cops who looked on amused. He kept demanding that the guy sell to him. "But you've sold me such good stuff! Come on, I really need it. Please!" But the guy wouldn't sell him any drugs and eventually the druggie accepted a cigarette and went away. So I had a nice plate of ribs and street theatre as a bonus.

I saw "The Matrix" again on Sunday. I had seen "The Making of: The Matrix" on TV this week and wanted to see the movie again. After seeing how the Kung Fu and the special effects were done, the movie is still totally awesome.

Books I want to buy soon:

The French golfer led by 3 shots walking to the 18th. He fell apart and blew it. He just lost a playoff. The golfer would have won if he could have shot a 6 on a par 4. Terrible.

Since the pictures were a big hit, I'll send some more. Here is a picture of our building. We have the righthand corner of the 4th floor. The building has 5 floors. 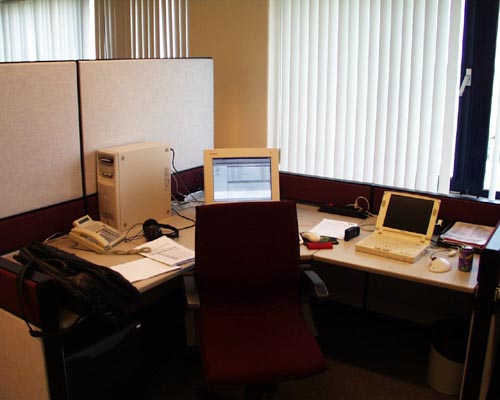